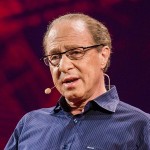 How to create a mind! The title is so tempting that anyone with the slight interest in mind and brain would take it from the bookshelf, especially when you see the author name: Ray Kurzweil. I have mentioned his name in my list of leading thinkers of the technology. He is one of the few scientists you can indisputably call them a futurist.

Holding 19 honorary doctorates, receiving Lemelson-MIT Prize (2001), and having a long invention list on his resume (including but not limited to the first print-to-speech machine for blinds, first omni-font OCR, K250 music synthesizer) justifies calling him a genius and considering his ideas about future seriously into consideration. The Author of the book Singularity is near, after discussing so many different technological trends in his previous book, here is going to show the roadmap of creating something superior to the human mind.

The most significant challenge Ray Kurzweil faces is trying to reverse engineer the mind.

In the last centuries, philosophers and metaphysic-believers have lost the brain ground in the battle with scientists and have accepted that the brain is part of the biologist’s territory. However, the mind is still considered by them and many other people with biased-scientists as something beyond an embodied cognition.

There are still many people who are not able (or willing) to accept consciousness as an emerging property of a complex system and prefer to consider it as a separate entity infused in the body of the living entities.

Therefore, you may see many objections to the book that are trying to protect their comfort zone even under the scientific cloak.

Here is the table of contents of How to create a mind:

Kurzweil states in the preface of the book that reverse engineering of the mind is the most important project in the universe.

In his book, he tries to apply pattern recognition knowledge to analyzing the brain function. He calls this process as Pattern Recognition Theory of Mind (PRTM).

Here’s the focal point of the criticisms of his book: Whether it’s the most appropriate approach to reverse engineering the mind or Kurzweil tries to see the brain as a nail just because The hammer is the only tool he has in hand?

In my opinion, the book is insightful enough to dismiss these criticisms and justify reading it and thinking about it.  Considering the fact that if we expect that every scientist approaches the problems with the tools he is not equipped with (!), then we are entering the territory of philosophy and metaphysics and all the superstitions which have been around for centuries.

From Kurzweil’s point of view in How to create a mind, the latest evolved part of the brain (Neocortex) is functioning like a hierarchical pattern recognition system, and this is what distinguishes it from the old reptilian brain.

Here we can have the new definitions of the existing mind-related terms:

Besides all appraisals and criticisms, how to create a mind is worth reading and thinking. It’s one of the greatest manifests of the transhumanism trying to go further than appealing inflated slogans.

Quotations from introduction of the book – How to create a mind