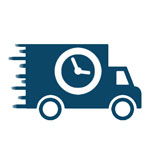 In his book titled The inevitable, Kevin Kelly argues that even in the world that many things are available in free, there are still values which people are willing to pay for.

Among all factors, Kelly puts the immediacy on the top of his list.

Here’s his definition of the term:

Sooner or later you can find a free copy of whatever you want, but getting a copy delivered to your inbox the moment it is released – or even better, produced – by its creators is a generative asset.

Therefore, Kelly believes that still, you can charge the customer for a product that could be available in free. It’s just possible if the customer receives it before the late majority.

Here are some of the examples of the early delivery premium paid by the customers:

The same idea can be applied to the content-based products. However, in some cases, it’s not as easy as it seems.

For a business that delivers news or digital magazines, it’s not so hard to charge the customers for early delivery. But for the evergreen content creators, it’s a bit harder to define and deploy a model.

Although I have found and implemented various ideas for immediate delivery of the evergreen content, willingly leave the case open to the reader, to find creative solutions for it.