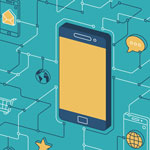 … We were people of the Word. Then about 500 years ago, orality was overthrown by technology.

… From printing came journalism, science, libraries, and law. Printing instilled in society a reverence for precision (of black ink on white paper), an appreciation for linear logic (in a string of sentences), a passion for objectivity (of printed fact), and allegiance to authority (via authors), whose truth was as fixed and final as a book.

[Because of availability and low cost of technology,] authors did not have to compose scholarly tomes only, but could “waste” inexpensively printed books on heart-rending love stories, or publish memoirs even if they were not kings.

That’s nearly one new screen each year for any human on earth.

We will start putting watchable screens on any flat surface.

We are now People of the Screen.

… People of the Screen tend to ignore the classic logic of books or the reverence for copies; they prefer the dynamic flux of pixels.

[In the screen age,] truth is not delivered by authors and authorities but is assembled in real time piece by piece by the audience themselves.

People of the Screen make their own content and construct their own truth.

[Although screens prevail our world,] if we count the creation of all words on all screens, you are writing far more per week than your grandmother, no matter where you live.