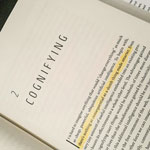 Chapter 2: Cognifying
[Cognification will be one of the major forces that shape our future]

There’s nothing as consequential as a dumb thing made smarter.

[We believed that] AI would be a bounded entity. We would know where our thoughts ended and theirs began.

However, the first genuine AI will not be birthed in a stand-alone supercomputer, but in a superorganism of a billion computer chips known as the net… Stand-alone synthetic minds are likely to be viewed as handicapped…

When this emerging AI arrives,  its very ubiquity will hide it.

We’ll use its growing smartness for all kinds of humdrum chores, but  it will be faceless, unseen.

We will be able to reach this distributed intelligence in a million ways, through any digital screen anywhere on earth, so it will be hard to say where it is.

Like many parents of a bright mind, IBM would like Watson to pursue a medical career, so it should come as no surprise that the primary application under development is a medical diagnosis tool.

At the rate AI technology is improving, a kid born today will rarely need to see a doctor to get a diagnosis by the time they are an adult.

The AI on the horizon looks… almost invisible except when it blinks off.

This common utility will serve you as much IQ as you want but no more than you need.

You simply plug into the grid and get AI as if it was electricity. It will enliven your inert objects, much as electricity did more than a century past.

Now everything that we formerly electrified we will cognify.

Quotes and excerpts from other parts of the book