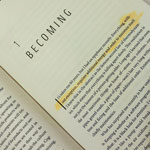 You may not want to upgrade, but you must because everyone else is. It’s an upgrade arms race… Continual upgrades are so critical for technological systems that they are now automatic for the major personal computer operating systems and some software apps.

In this era of becoming, everyone becomes a newbie. Worse, we will be newbies forever.

Neither dystopia nor utopia is our destination. Rather, technology is taking us to protopia.

More accurately, we have already arrived in protopia.

Protopia is a state of becoming, rather than a destination.

A protopia generates almost as many problems as new benefits.

Unlike the last century, nobody wants to move to the distant future. Many dread it.

That makes it hard to take the future seriously. So we’re stuck in the short now, a present without a generational perspective.

Any promising new invention will have its naysayers, and the bigger the promises, the louder the nays.