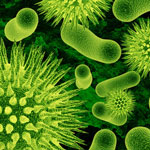 As evolution takes generations to achieve tangible results, usually it’s supposed that we are not able to see the process within our lifetime.

Although such an assumption could be true for the human species, for many other species who have shorter lifespans, it’s possible to arrange laboratory settings exhibiting the evolutionary process.

Here you can see a time lapse video published by Harvard Medical School demonstrating evolution of the bacteria against antibiotics over a couple of generations.

The whole evolutionary process happened in about ten days.

The experiment is administered by Tamy Lieberman and Roy Kishony.