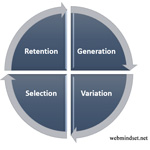 Darwin’s theory of evolution itself has experienced an evolutionary process. A process that started around a very sensitive topic: The origin of species.

As it always has been a long historical debate between believers and non-believers about the origin of the world and the humans, soon both camps found a new battleground for the old debate.

However, as they are just proposing two opposing models of the world which never could be proved or disproved, as we know, neither advocates of intelligent design school (or so-called creationists) nor proponents of the evolutionary theories, would never be able to push the other party out of the game.

Creationists – as they say – are talking about something beyond human sense and sensibility. Therefore, their view of the world could never be disproved scientifically.

On the other side of the battle, evolutionists are trying to collect scientific evidence and, science is inherently doubtful about itself. In the eyes of the scientists, The Science (with big S) will be forever incomplete and therefore, a real scientist would never believe in his assertions.

Scientists just consider their theories as working models of the perceived reality and nothing more.

Kerkut’s distinction between the special and general theory of evolution is one of the simplest descriptions available in the literature:

There is a theory which states that many living animals can be observed over the course of time to undergo changes so that new species are formed. This can be called the ‘Special Theory of Evolution’ and can be demonstrated in certain cases by experiments. On the other hand, there is the theory that all the living forms in the world have arisen from a single source which itself came from an inorganic form. This theory can be called the ‘General Theory of Evolution’ and the evidence that supports it is not sufficiently strong to allow us to consider it as anything more than a working hypothesis.

you can download his book using the following link:

Evolution as a problem-solving tool: a lost opportunity

Although the origin of Darwin’s evolution theory goes back to his researches about the origin of the species, applications of his model have potential to go much further than the original use.

However, the puzzle of creation has been so amusing for the homo sapiens that most of them couldn’t take a look at more urgent and closer problems waiting for a workable solution.

Sure, I’m talking about the ordinary people with a common understanding of science. Because for the majority of the scientists, the evolution has already proved itself as a helpful approach for the understanding of the complex systems.

Despite all the above points, it’s still a pity that we humans have missed the opportunity to use this brilliant tool at its full potential for understanding and re-engineering our environment.

For evolution to be used as a problem-solving tool, you need the following pre-conditions:

The above concept with the same or similar wording can be found in texts of Dawkins or other evolution theorists. Although the debates between creationists and evolutionists seem to have no end – at least in the near future – the evolution as a problem-solving tool would remain the most brilliant invention or innovation or discovery of the humans ever since they have become conscious of their existence in the universe.

Genetic Algorithms, Complex Systems, Mathematical Optimization Models, A/B testings and conversion optimization (in digital marketing) are just a few samples of the species evolved in the universe that Darwin created for us.