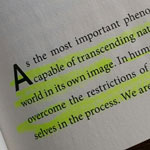 How to create a mind - Introduction

… intelligence is capable of transcending natural limitations, and of transforming the world in its own image.

In human hands, our intelligence has enabled us to overcome the restrictions of our biological heritage and to change ourselves in the process. We are the only species that does this.

The story of human intelligence starts with a universe that is capable of encoding information.

This was the enabling factor that allowed evolution to take place.

The story of evolution unfolds with increasing levels of abstraction.

The mammalian brain has a distinct aptitude not found in any other class of animal.
We are capable of hierarchical thinking, of understanding a structure composed of diverse elements arranged in a pattern, representing that arrangement with a symbol, and then using that symbol as an element in a yet more elaborate configuration.

The primary idea in my three previous books on technology is that an evolutionary process inherently accelerates (as a result of its increasing levels of abstraction) and that its products grow exponentially in complexity and capability.

I call this phenomenon the law of accelerating returns (LOAR), and it pertains to both biological and technological evolution.