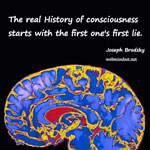 From the chapter introduction: How to create a mind - Thought Experiments on the Mind

Minds are simply what brains do.

The real History of consciousness starts with the first one’s first lie.

… One view is that philosophy is a kind of halfway house for questions that have not yet yielded to the scientific method.

When discussing consciousness, it becomes very easy to slip into considering the observable  and measurable attributes that we associate with being conscious, but this approach misses the very essence of the idea.

I just mentioned the concept of metacognition – the idea of thinking about thinking – as one such correlate of consciousness.

My own view, which is perhaps a subschool of panprotopsychism, is that consciousness is an emergent property of a complex physical system.

In this view a dog is also conscious but somewhat less than a human.

Before brains there was no color or sound in the universe, nor was there any flavor or aroma and probably little sense and no feeling or emotion.

… Western and Eastern perspectives on the nature of consciousness and of reality.

In the Western perspective, we start with a physical world that evolves patterns of information.

After a few billion years of evolution, the entities in that world have evolved sufficiently to become aware conscious beings.

In Eastern view, consciousness is the fundamental reality; the physical world only comes into existence through the thought of conscious beings.

These are of course simplifications of complex and diverse philosophies, but they represent the principal polarities in the philosophies of consciousness and its relationship to the physical world.