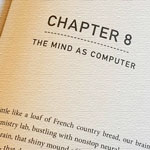 How to create a mind - The mind as computer

Brains exist because the distribution of resources necessary for survival and the hazards that threaten survival vary in space and time.

In mathematics, you don’t understand things. You just get used to them.

Similarly, a computer can become a brain if it is running brain software. That is what researchers including myself are attempting to do.

The question, then, is whether or not we are can find an algorithm that would turn a computer into an entity that is equivalent to a human brain.

There is actually one genuine forerunner to Von Neumann’s concept, and it comes from a full century earlier!

English mathematician and inventor Charles  Babbage’s (1791 – 1871) Analytical Engine, which he first described in 1837, did incorporate von Neumann’s ideas and featured a stored program via punched cards borrowed from the Jacquard loom.

Von Neumann applied the concept of the universality of computation to conclude that even though the architecture and building blocks appear to be radically different between brain and computer, we can nonetheless conclude that a von Neumann machine can simulate the processing in a brain.  The converse does not hold.

A short note from the blog’s author:

The converse does not hold.

The above statement, which I’ve already highlighted and emphasized in the text, seems to me as one the greatest achievements of the humans in understanding the brain (or mind, if you prefer to include its emerging characteristics).

If we imagine an unbreakable wall between the present time and the far future, theabove-mentioned Fact is the largest hole in the wall enabling us to take a look back to the future.