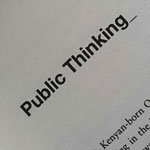 Smarter Than You Think - Public Thinking

I calculate that we’re composing at least 3.6 trillion words daily, or the equivalent of 36 million books every day.

The entire U.S. Library of Congress, by comparison, holds around about 35 million books.

The science fiction writer Theodore Sturgeon famously said something like, “Ninty percent of everything is crap,” a formulation that geeks now refer to as Sturgeon’s Law.

Literacy in North America has historically been focused on reading, not writing; consumption, not production… While many parents worked hard to ensure their children were regular readers, they rarely pushed them to become regular writers… The advent of digital communications, Brandt argues, has upended that notion.

This writing changes our cognitive behavior. It can help clarify our thinking.

Professional writers have long described the way that the act of writing forces them to distill their vague notions into clear ideas.

By putting half-formed thoughts on the page, we externalize them and are able to evaluate them much more objectively.