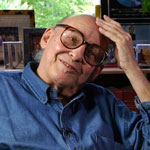 I’m not going to provide you with a full script of the interview. Just quoting a couple of sentences that have been interesting to me.

I’m Marvin Minsky, and I teach at MIT in subjects of, theories about, how to make machines that are intelligent, whatever that means.

I come from a combination of mathematics and physics and electrical engineering and psychology and biology, and I try to get my students to combine all those ideas to invent new things.

Why we have slow progress in the field of artificial intelligence?

I see a problem with this field of artificial intelligence. Because biology and physics worked so wonderfully that the people are trying to make intelligent machines would like to imitate it… Hundred years ago there were four great psychologists (Freud, Wundt, William James, Francis Galton) who made rather complicated theories about how the mind works. But then a lot of psychologists tried to imitate the physicists and reduce it to a few simple laws and it didn’t work so well.

The neurons in our brains are almost the same as they were 400 million years ago but the organization is much more complicated.

Is the brain just a machine?

I don’t think there is any self, and I like Sigmund Freud’s old theory: The brain starts out with a lot of little instinctive things… but as we develop, we also develop what Freud calls ideals and aspirations and ethics and constraints. Freud’s image of development is that most of the mind is resolving conflicts between low-level instincts that are not very different from other animals and high-level values and constraints which we develop in social situations.

So, there’s no person in here… Identity is an illusion.