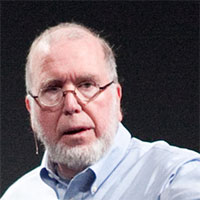 Kevin Kelly is one of my favorite authors on technology and I have quoted various parts of his book ‘The Inevitable’ in this blog.

Here are some of his quotes and statements I have collected while reading his books and thought that it might be interesting for you too. Summarizing the memetics and some other similar ideas:

Humans are the reproductive organs of technology.

On emergence and evolution:

A brain is a society of very small, simple modules that cannot be said to be thinking, that are not smart in themselves. But when you have a network of them together, out of that arises a kind of smartness.

On what technology wants:

On how the technology has helped us to know ourselves more than before:

Technological advances could allow us to see more clearly into our own lives.

We are reaching deep within ourselves to adjust the master knob.

On the emergence of a global brain (or machine):

A mechanical/evolutionary view of the world:

Clearly, we are self-made. We are the first technology. We are part inventor and part the invented

Future is not so far from now:

The very long tail of the future is already here.

Life is the ultimate technology. Machine technology is a temporary surrogate for life technology. As we improve our machines they will become more organic, more biological, more like life, because life is the best technology for living.

The only factor becoming scarce in a world of abundance is human attention.

Describing the mission of every system (restatement of survival goal):

Each system is trying to anticipate change in the environment.

A simple definition of singularity:

Evolution as a dynamic – constrained process:

When you are embodied in a location, in a physical plant, in a set of people, and in a common history, that constrains your evolution and your ability to evolve in certain directions.

One of his few motivational statements:

In the context of your dreams, knowledge will always give you enough reasons not to act. Act regardless and execute exceptionally.

On the distributed intelligence:

And they discovered something very interesting: when it comes to walking, most of the ant’s thinking and decision-making is not in its brain at all. It’s distributed. It’s in its legs.

On evolution and the meaning:

Evolution doesn’t care about what makes sense; it cares about what works

Here you can find a list of some other quotes and excerpts from his works: