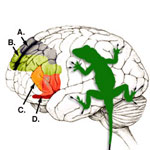 Lizard Brain is the term used in popular psychology and personal development, referring to the older parts of the brain. In non-technical language, the lizard brain, supposed to be the very primitive part of the brain common between reptiles and mammals, is considered responsible for basic survival functions such as breathing and fight or flight response.

The lizard brain is commonly contrasted with the mouse and monkey brains. While the former represents the part of the human brain responsible for memory and emotion, the latter denotes the newer part of the brain, capable of complex cognitive functions and higher-order thinking.

The following diagram depicts this so-called triune model of the brain (+):

No matter how close to reality, this simplified divided model of the brain has been attractive for authors of management, psychology, and personal development books. For example, Seth Godin, the well-known business writer, has used the term extensively in his book Linchpin. Here are a few samples:

John Medina, the author of the best-selling book Brain Rules, is also comfortable with using the term “lizard brain”:

Your most ancient neural structure is the brain stem, or “lizard brain.” This rather insulting label reflects the fact that the brain stem functions the same in you as in a Gila monster. The brain stem controls most of your body’s housekeeping chores. Its neurons regulate breathing, heart rate, sleeping, and waking. John Medina

Lisa Feldman Barret, the well-known and respected neuroscientist, the author of various academic books, and chief editor of The Emotion Review journal, has criticised this model in simple words understandable for the non-technical audience.

In her book, Seven and a Half Lessons About the Brain, Barret describes the model as “one of the most successful and widespread errors in all of science.”

Look at the following passage from her book:

It’s certainly a compelling story, and at times, it captures how we feel in daily life.

For example, when your taste buds are tempted by a luscious slice of velvety chocolate cake but you decline it because, honestly, you just finished breakfast, it’s easy to believe that your impulsive inner lizard and your emotional limbic system pushed you in a cake-ward direction, and your rational neocortex wrestled the pair into submission.

But human brains don’t work that way. Bad behavior doesn’t come from ancient and unbridled inner beasts. Good behavior is not the result of rationality. And rationality and emotion are not at war . . . they do not even live in separate parts of the brain.

Barret tells the story behind this model and the way it got traction and survived till now. A physician named Paul MacLean has visually inspected the brains of lizards and mammals, including humans, and concluded that part of these brains is similar. He considered it as the old part, shaped in the early stages of evolution, and responsible for basic survival functions. In such a model, the human brain has extra parts sitting over this old brain, which evolved in later stages of evolution, responsible for complex cognitive functions.

But what’s the better description of the brain’s structure? Barret tells us that:

Brains are not evolved in layers and are not designed to allow rationality to conquer our animalistic urges and emotions.

For example, one single region of the mouse brain, most likely expanded and subdivided to redistribute its responsibilities as our ancestors evolved larger brains and bodies. This arrangement among brain regions — segregating and then integrating — creates a more complex brain that can control a larger and more complex body.

It’s a tricky business to compare the brains of different species to discover what is similar, because the path of evolution is twisty and unpredictable.

Why lizard’s brain is attractive to authors, coaches and mentors?

Most of the courses, classes and discussions about behavioral modification and emotion regulation revolve around a fundamental yet essential point: “You must monitor your first reactions and manage your impulses.” Or in other words: “Think twice before any judgment or doing anything.” This recommendation is crucial, and authors and coaches prefer to reinforce it with scientific evidence. Thus, instead of simply saying, “Beware of impulsive behavior,” they like to put it beside “scientific” pieces of evidence. Neuroscience is an attractive and persuasive term, and why not use these kinds of pseudo-neuroscientific descriptions as support for our recommendations? 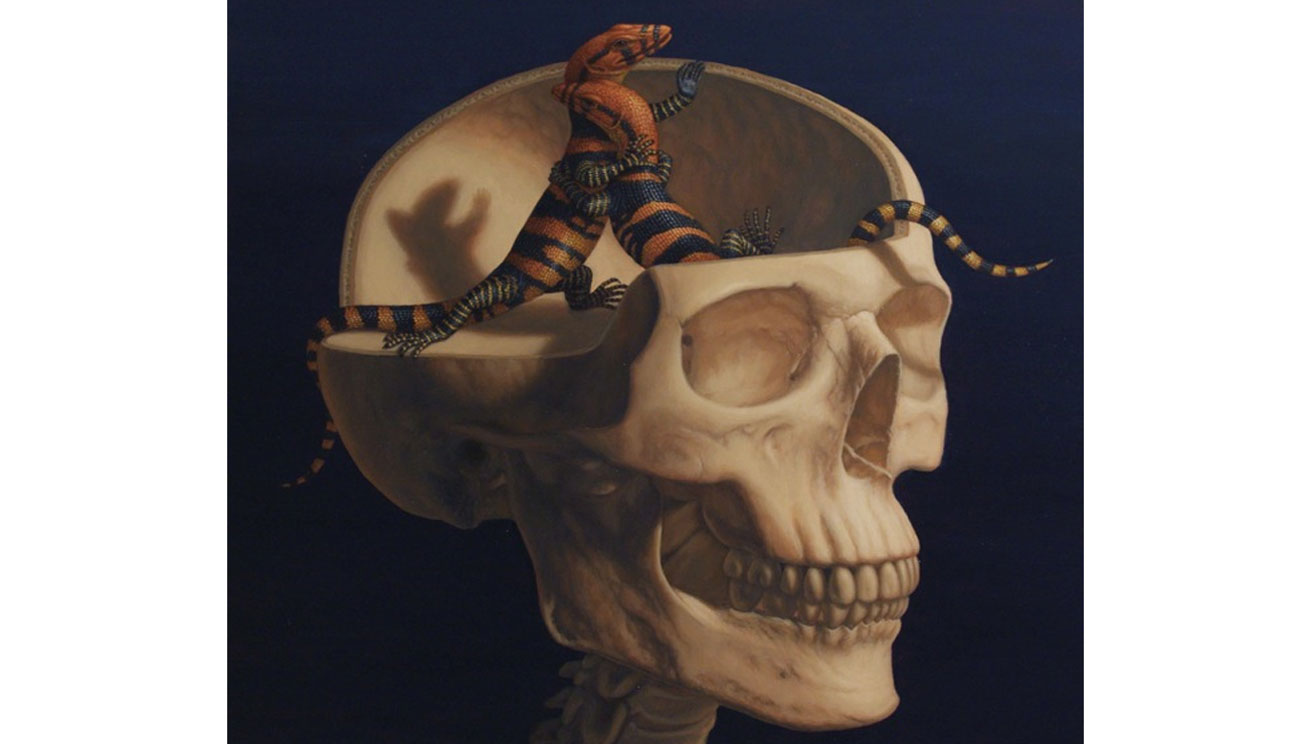 Is it wrong to use this term? No. This simplified model can be helpful in teaching. The term lizard brain is much shorter and more understandable than “all fast emotional conservative automatic responses of the human brain.” But we have to remember and remind that we are not talking about the brain’s actual structure, and it’s just a metaphor.