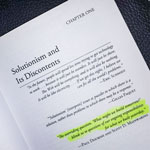 Chapter Title: Solutionism and its discontents To save everything click here - Solutionism and its discontents

[with solutionism] one local problem might be solved – but only by triggering several global problems that we can’t recognize at the moment.

These to innovations – that more and more of our life is now mediated through smart sensor-powered technologies and that our friends and acquaintances can follow us anywhere, making it possible to create new types of incentives – will profoundly change the work of social engineers, policymakers, and many other do-gooders.

With solutionism I mean… preoccupation with monumental, and narrow-minded solutions the – kind of stuff that wows audiences at TED conferences to the problems – to problems that are extremely complex, fluid, and contentious.

Design theorist Michael Dobbins has it right: solutionism presumes rather than investigates the problem that it is trying to solve, reaching “for the answer before the question has been fully asked.”

It’s also that what many solutionists presume to be “problems” in need of solving are not problems at all; a deeper investigation into the very nature of these “problems” would reveal that the inefficiency, ambiguity, and opacity – whether in politics or everyday life – that the newly empowered geeks and solutionists are against are not in any sense problematic.

In his influential book The Rhetoric of Reaction, Hirschman argued that all progressive reforms usually attract conservative criticisms that build on one of the following three themes: