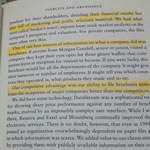 The Curve - Chapter 2: Scarcity and Abundance

A “like” [on Facebook] doesn’t necessarily translate as a fan. It’s a very passive relationship (Quoted from Troy Carter).

One of our best sources of information on what a company did was brochures… annual reports…detailing financial results but also full of marketing and public relations material… Our competitive advantage was our ability to file brochures stolen from the receptions of major companies better than our competitors!

The competitive advantage for an investment bank is not to have information: it is to filter out the noise and find the important nuggets….

Dropbox is estimated by Forbes to have made $500 million in revenue in 2012 and to be profitable, even though only about 4 percent of users pay it any money at all.

Humans just aren’t very good at accepting that was once scarce is now abundant… Abundance, from an evolutionary perspective, resolves itself, while scarcity needs to be fought over.

A wealth of information creates a poverty of attention (Quoted from Herbert Simon).