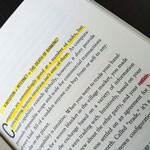 Computers are astoundingly good at a number of tasks, but anticipating human intuition isn’t one of them.

The barter is enormously intuitive: It relies directly on reputation. It’s also the oldest method of exchange known to mankind, and our brains have had thousands of years of adaptation to evolve to it.

In his book Debt: The First 5000 Years, anthropologist David Graeber describes the Tiv of West Africa, who believe that completing an economic transaction is immoral at its core, or at the very least rude, because it indicates that one party doesn’t want to engage with the other in the future.

The reason for the rise in dominance of representational, quantifiable currencies such as money was basically logistical restrictions.

The concepts behind reputation economics – trust, multiple currencies for exchange, the use of barter, trade and gifts, etc – are all already in play in the second-biggest economy on the planet.

The only reason you haven’t heard about it yet is that it’s almost entirely illegal.

Let me introduce you to hawala (حواله) which in Arabic means “transfer”. It is basically a parallel or alternative remittance system that exists or operates outside of, or parallel to traditional banking or financial channels.